As a class we visited the AOP awards in London, Looking at all the different styles of photography and the people who had entered different categories really gave me inspiration into all the different varieties there are within this field of work. I was particularly interested by this one photo (Below). The photographer who produced this is Guy Farrow, I feel like this interested me because I myself would like to go into event photography and this could be a starting point towards that career pathway. The image is called ‘Blind Drummer’ and the description for this image was a  ‘campaign for bombardier beer ‘march to your own drum’ using a blind drummer as the hero’.

In the next few paragraphs I am going to write about why this image stood out to me amongst so many others that were on display and up for the same award.

The first thing I want to talk about is the lighting that has been used in this image and why It makes such an impact on the ideas behind the image. I love the way that there has been minimal lighting used but it has been used to define certain areas, for example It has been used to define the drums and the ‘Blind’ man playing the drums. Another place the lighting has been used cleverly is where the water splashes off the drums as they are being hit. I think that this really add’s something a little bit extra and makes it stand out more, this is a reason I liked what I saw because it was different to the normal way of showing someone doing something so simplistic. I also am very fond of the way the blue lighting effect hits what seems to be steam or smoke that is around the drummer I feel like this again gives the image more power and to me I would say that this sends a message of how no matter what you love doing if you try hard enough you can explode the possibilities. (This may seem far fetched but in my mind when I look at this image that is how I feel as music is something I have a passion for as well as photography). I also believe that the Image really shows you that even if you are labelled with a ‘disability’ you are capable of doing whatever it is you find your heart wanting to do.

During the last paragraph I talked a little bit about the different colours that have been used to create such a cool effect with the smoke and the water splashes. I love how the photographer has managed to get the brown colour of the drums to really show up so that is where your eyes lead to first, I think by then using the blue lighting effect they have then been able to draw peoples eyes to the gentleman playing the drums and the water droplets that are surrounding as the sticks hit the skin of the drum. I also like that in the background there are amps and various other items but it doesn’t mean that your eyes automatically get drawn to those areas, I love the shadow effect that creates what seems like a dark and dull background compared to the front where it all looks a little bit more interesting and there are brighter colours and everything really does just stand out a lot more than those random things that would have been strategically chosen but not as important as those background items.

Guy Farrow came third in the Advertising / Product section of the awards which is a great achievement. Yes it may not have been first but sometimes this industry can be very difficult so I feel as though third place is a good place.

After seeing his work at the AOP Awards I think I am going to try looking into his work some more as I have been able to find his Instagram which I have screenshot and placed on this blog post with a link attached so anyone is able to go and check out some of his work. 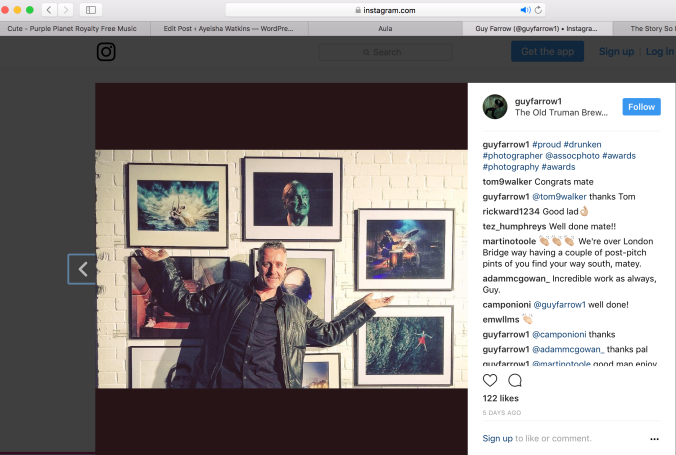